The Whist Family of Card Games 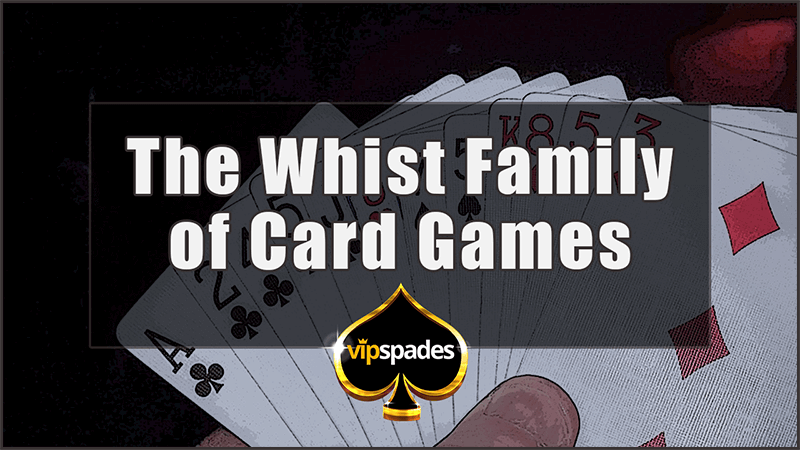 At their core, games in the Whist family are all trick-taking card games that are simple to learn but difficult to master due to their potential for scientific play. As you may have imagined, they are all more or less based on a classic English card game called Whist.

Whist is a game that became popular in England in the 17th century. It gets its name from the word common in that time that meant quiet, silent, or attentive and is now the root of our word, wistful. Of course, those of us playing other games in the Whist family may struggle to imagine how anyone does so quietly or silently!

It was first played by a group of gentlemen playing more out of scientific interest than for enjoyment. One among this party, Edmond Hoyle, began to teach the game and even wrote a book on its rules in 1742 called A Short Treatise on the Game of Whist. In doing so, he popularized the game and became the primary authority on how Whist was played.

In 1862, another authoritative book was published on the subject of Whist that greatly expanded the original rules of gameplay, making them infinitely more complicated and including sections on the etiquette expected of players while at the Whist table. By this time it took commitment and hard study to learn the rules of the game. At its most basic level, Whist was a four player game played in two partnerships, in which players tried to take tricks by playing the highest card, including trump. There was no bidding aspect in the original game. Though it is still played by some, Whist’s popularity was largely passed on to the more simple, easy to play games that were derived from it.

Whist itself isn’t completely original- it is a modification of older, 16th century games like Trump or Ruff and Honours. But, those games share fewer similarities with our modern day games, so we tend to think of Whist as the “head” of the card game family, so to speak.

In the 1890s, a variation of Whist popped up that was called bridge whist, which eventually evolved into contract bridge, or, as it is better known now, simply Bridge. In this game, the trump suit is determined by the players at the start of each round, though it is possible that there will be no trump suit at all in any given round. Bridge is widely played both casually and competitively and is arguably the most popular modern day Whist-type game, though it is certainly not the only one.

Hearts is also an extremely popular modern game that evolved from Whist. In this variation, however, the object is to avoid taking tricks most of the time. Because of this unique variation, there is no bidding. In Hearts, there are penalties for collecting certain cards (Hearts) in tricks that are best avoided by not collecting any tricks at all. However, if one player is feeling particularly brave, they may choose to try and “Shoot the moon,” which means that they must collect every Hearts card in play. If they succeed, they may assign a 26 point penalty to all other players while their own score remains unchanged. However, if they fail, even by missing one penalty card, they have to take the full penalties for all the cards they did manage to collect.

Spades is a Whist-type game in which the trump suit is always predetermined to be spades. There are a few variations of spades, but they are all whist-derived and have the same basic gameplay. Players bid how many tricks they think they’ll be able to take in a round, being careful not to bid too many. An interesting feature of this game in particular is that players may choose bid “blind nil,” meaning that they commit to taking no tricks at all during a round without even looking at their hand. It can be a nerve wracking way to play, but offers considerable score bonuses if you can actually pull it off!

There are many more games in the Whist family of card games that are played across the world, but these are the most popular. Chances are good that if you know how to play any one of these games, you’ll be able to pick up any of the others without too much difficulty.