Home » How to win at Spades

Win at Spades: Tips on How to Figure Out Opponent’s Hand 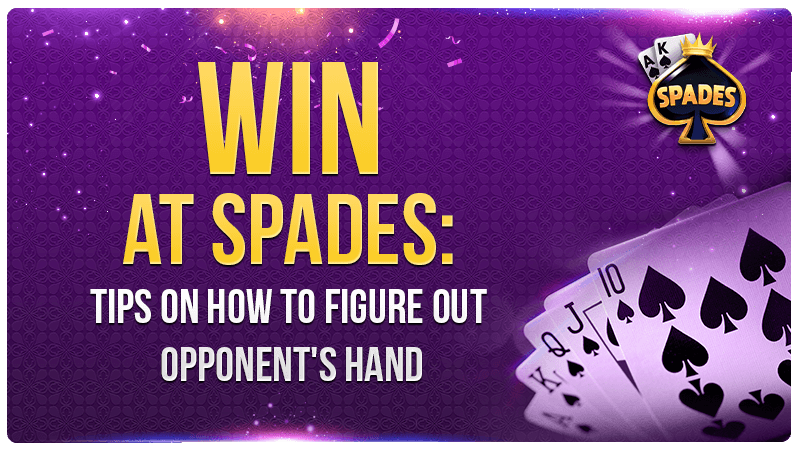 When does the old expression “a spade is a spade” not really apply? In a Spades game, the 13 playing cards trump (rank higher) than other suits. Guessing your opponents’ hands is crucial. This skill can help you score more points and win the game.

Continue reading to unearth some of the most effective ways you can try to guess your Spades opponents’ remaining cards.

What’s the Point of Guessing Your Opponents’ Spades Hands?

Based on the rules of Spades, you earn points by making a correct “bid” on how many “tricks” you can win in a round. A trick is a set of cards all players play during their turn.

Projecting how your hand stacks up (pun intended) against the other players’ can help correctly guess how many tricks you’ll win during a round.

Here are some helpful tips.

When leading trumps are legal, you have various options related to your opponent’s hand. Let’s say you have an ace or king of spades. The main goal should be to use your high trump card to “draw” the opponents’ trumps.

This goal stops them from scoring trump tricks. You can also more accurately guess their remaining cards. Consider how many and which trump cards your opponent plays.

2. Players Typically Play the Highest Card of a Given Suit Remaining

A player that takes the first trick typically leads another ace. Another player can’t beat them unless they’re entirely out of that suit. Then they can play a spade.

If a player is out of aces, they usually lead with a king of a suit whose ace another player has played.

If Spades players have played the ace and king of a particular suit, then a player may play the queen of the suit.

Remember that after players have played two cards of a particular suit, they’re likely running out of cards in that suit. Since the dealer gives each player 13 cards, they have an average of three cards per suit. Here’s the math:

Remember that the objective of Spades is to bid how many tricks you’ll win correctly. So it’s essential to know how to bid in Spades.

This factor can cause a player to overbid or underbid. Such actions may reveal whether a player uses a more aggressive or conservative playing style. You may then better determine the likely cards a player is holding.

4. Players Often Play Spades After Running Out of a Particular Suit

Gamers typically lead a card of a suit of which they have few. An example is one cad. After the player plays all their cards of a particular suit, they may play a spade.

Let’s say a player plays the ace of hearts then plays the two of spades. It’s a likely indicator that the player doesn’t have any hearts left.

5. Consider the Other Players When Opening

You can apply some Bridge strategies in Spades. For example, suppose the opening (first) lead an opponent on your right is a suit in which you hold a king, queen, or jack and some low number cards.

In this case, save the court cards (king, queen, or jack) for later.

6. Players May Try to Hold Onto the Ace or King of Spades

In the song Desperado (1973), the Eagles band claimed, “The queen of hearts is always your best bet,” Well, in Spades, it’s the ace of spades.

If you don’t see the ace or king of spades after several rounds, players may be holding them for the end of the game. It’s particularly true if they need just one more trick to reach their bid.

Remember that exceptions exist when a player should or must play high-value cards like the ace of spades before the end of the game.

Consider this situation. Another player plays a spade, and the player with the ace of spades doesn’t have another spade. The situation forces the player to play the top trump card.

7. Use Strategies to Benefit Your Spades Partner’s Likely Cards

You can use strategies to determine and leverage your partner’s likely hand. Here are some tips:

Making good plays in the game of Spades is crucial to success. Guessing your opponents’ likely remaining cards can take your Spades strategy to the next level.

The tips mentioned above may help you determine whether a player is holding an ace or has run out of a suit.

Register now
This website or its third-party tools use cookies and other similar technologies, which are necessary to its functioning and required to achieve the purposes illustrated in the Privacy Policy. If you want to know more or withdraw your consent to all or some of the cookies, please refer to the Cookie Policy. By closing this banner, scrolling this page, clicking a link or continuing to browse otherwise, you agree to the use of cookies.
Cookie SettingsAccept
Manage consent

This website uses cookies to improve your experience while you navigate through the website. Out of these, the cookies that are categorized as necessary are stored on your browser as they are essential for the working of basic functionalities of the website. We also use third-party cookies that help us analyze and understand how you use this website. These cookies will be stored in your browser only with your consent. You also have the option to opt-out of these cookies. But opting out of some of these cookies may affect your browsing experience.
Necessary Always Enabled
Necessary cookies are absolutely essential for the website to function properly. These cookies ensure basic functionalities and security features of the website, anonymously.
Functional
Functional cookies help to perform certain functionalities like sharing the content of the website on social media platforms, collect feedbacks, and other third-party features.
Performance
Performance cookies are used to understand and analyze the key performance indexes of the website which helps in delivering a better user experience for the visitors.
Analytics
Analytical cookies are used to understand how visitors interact with the website. These cookies help provide information on metrics the number of visitors, bounce rate, traffic source, etc.
Advertisement
Advertisement cookies are used to provide visitors with relevant ads and marketing campaigns. These cookies track visitors across websites and collect information to provide customized ads.
Others
Other uncategorized cookies are those that are being analyzed and have not been classified into a category as yet.
SAVE & ACCEPT
Powered by