How to play Spades with 2 people 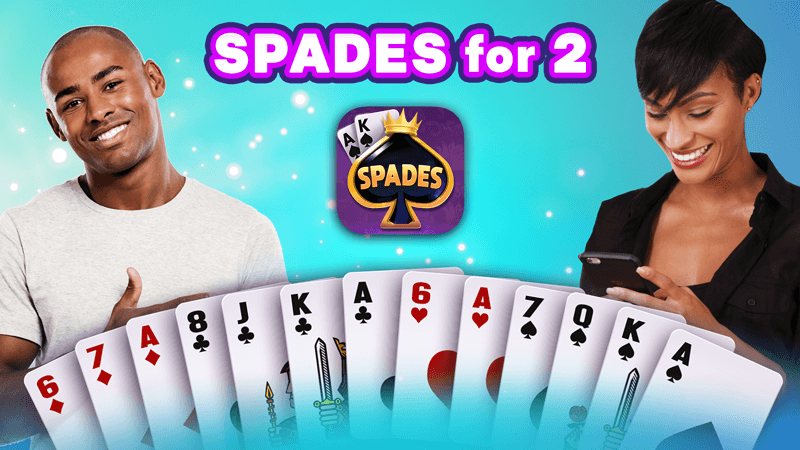 Usually, the game of Spades is played by 4 people. They either form 2 teams that compete against each other, or everyone plays for themselves. These are the two most common spades game modes – pairs and solo.

But is it possible for just 2 people to play Spades? The answer is yes. Spades can be a card game for 2 players.

The rules are similar to the classic Spades game. However, there are a few notable differences, especially in the dealing of the cards.
Here are the rules of 2 player Spades.

1. Distribution of the cards

Players use a standard card deck with 52 cards. The deck consists of 4 suits with 13 cards each – Ace is high, 2 is low. Cards are shuffled and then placed in the middle between both players.

When 2 people play Spades, there is no dealing. Instead, both players draw cards from the deck. They take turns drawing 2 cards one by one. If a player keeps the first card, the second one must be discarded and vice versa.

For example, let’s say player “A” draws a card and decides to keep it. Then he draws a second card and is obliged to discard it. After that, it is the turn of player “B” to draw. The first drawn card is discarded. In that case, player “B” must keep the second card.

At the end of the drawing, each player must have 13 cards in their hand. Discarded cards are not used.

Both players must declare the number of tricks they think they will win. The bidding strategy always has an important role. If a player underbids and wins fewer tricks than expected, they will score a negative number of points as a penalty. However, knowing that there are 13 tricks at stake, a bid of at least 6 seems reasonable.

Bidding Nil is called when a player bids 0 tricks. Your hand has to be incredibly weak to bid nil. It is a risky move but with a high reward if successful. It can give +100 or -100 points. Players can also bid nil before drawing their first card. This is known as a blind nil bid.

The gameplay follows the same rules as the classic game of Spades. Players must follow suit and the card with the higher value wins the trick. Spades are always trumps. It is not allowed to play a spade unless you can not follow suit or have only spades in your hand.

When the first spade card is played during the round, it is said that the spades are being broken. This act is called breaking spades. From this point on, players are allowed to lead with a spade.

If a player successfully completes their bid, each trick rewards +10 points. For example, a bid of 6 tricks rewards +60 points. But winning fewer tricks will have negative consequences. You will lose -10 points for each declared trick you bid at the start. So if a player’s bid was 6 and they managed to win only 5 tricks, the result will be -60 points penalty.

A successful nil/blind nil bid gives respectively +100/+200 points. The unsuccessful ones will have a negative score -100/-200.

The final winner will be the player that first reaches a certain amount of points, typically 500.

It is best to avoid winning too many tricks over your bid. These are called bags and could result in a penalty. Each overtrick is counted as 1 bag. When you reach 10 bags, -100 points will be deducted from your score.

In our opinion, it is better to have 1 or 2 bags at the end of the round than to underbid. Because the penalty for winning fewer tricks is much higher. For more tips, check our how to win at Spades article.

You can always play Spades online at VIP Spades. Our game has many advantages, and the best of them are explained in detail here. The most common Spades variations are available. Enjoy your favorite game on any device for free.