Home » Is Spades A Game Of Luck Or Skills?

Is Spades A Game Of Luck Or Skills? 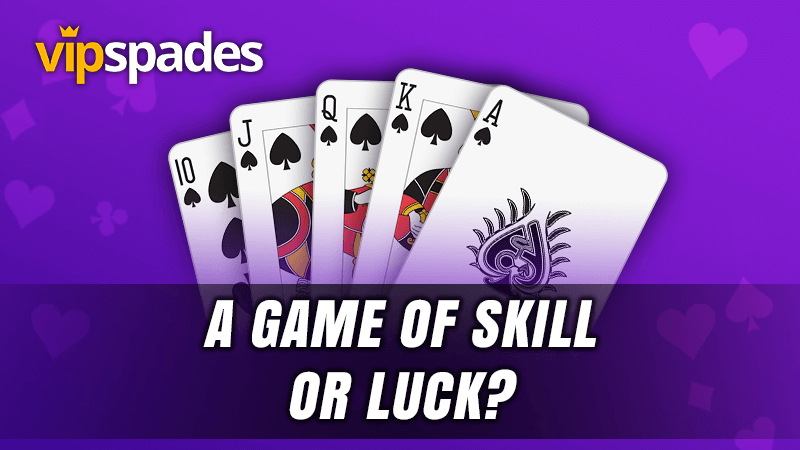 “Would I become better, if I develop my skills?”. “Is it all pointless and I just have to be one of those lucky people in order to win?”. If you are new to this game, you probably have just started to build your spades bid strategy and you have already asked yourself those questions. If you are a seasoned player, you probably have reached your own answer.
But what is the truth?

What is Spades in its essence?

Spades is fun, friendly and strategic 52-card trick-taking game. Usually, it is played as a partnership game, but you can also play it as a solo. The basic thing about spades is that each player receives 13 cards. Then he bids a number of tricks from 0 to 13, which he expects to win. If you play with a partner the biddings of both of you sum up together and form a team bid. You must win it together in order to achieve a positive score.

Sometimes you can do it, sometimes it is not that easy. Many times you may be in a situation where you miss your bid with a little. Just as many times you may underestimate your hand and take more tricks than you have thought you will. Sometimes it is also possible to win thanks to a mistake of the opposite team. Other Times you must risk everything so that you can get more. You must always have some strategy! But there is a dose of luck in all of that, which may tilt the scales.

So, Is spades more of a skill based game or a game of luck? Is it enough to know just the rules of spades, so that you can win the game? Or maybe luck is all you need?

The key to winning a game of spades is hidden in the accurate bidding! There are definitely some subtleties concerning this which you can learn and use. This will help you a lot to grow your skills in spades!
For example here are some tips:

When you are building your spades bid strategy those things can be definitely of help. They can really make the difference!

How important is luck in Spades?

Some people say that luck is everything you need to achieve victory. Others say that there is no such thing as luck and skills are all that you need. Personally, I would say that your win rate will not be high without skills, but without luck, it won’t be either.

Why luck matters? In the game of spades, there are situations in which luck is everything that can save you from complete defeat! Which are they? When making a NIL or BLIND NIL bid.

A NIL bid means that the player declares that he will not win any tricks in this round. If he succeeds, he wins 100 points, but if he doesn’t – he receives a penalty of 100 points.

A BLIND NIL bid means the same. You declare that you will not win any tricks, but this time without looking at your cards. If you manage to do so you get 200 points. If you don’t …. well probably the game will end after the end of the round.

As you have probably already noticed, to make a bid like this is very risky, but also – very rewarding. If you take even one trick you lose, but if you don’t your winning chances get bigger with a lot! Everything depends on how lucky you are and which cards will you get.

With the NIL Bid you have seen your cards before deciding to take the risk and make the bid. You must be careful about not making a mistake and taking tricks. And hopefully, if you are lucky enough, the other players won’t be able to trick you into taking a trick.

With the BLIND Nil bid, if luck is not with you-you lose before the round even starts! It is possible to have the Ace of spades in your hand. In this case, you can’t win no matter what. If you have K and Q of spades – again you just can’t win! It is predestined by fate!

Have you wondered:
“Can I increase my victories in spades, if I improve my skills or does everything depend on luck?”
My answer to this question is:
“You need both!”

Spades is a game that you can’t win solely depending on luck. Also, you can’t win every time just with your skills. You can’t always get the cards you want and sometimes, no matter what you do your opponent just has a better hand!

Every spades player must improve his skills and have some strategy. Research and learn everything that you can in order to ensure your win. If you are lucky enough and get the right opportunity, take advantage of it and win with both luck and skills!